Below you can find common questions about the Planet Youth programme
with detailed answers.

Planet Youth was developed by the Icelandic Centre for Social Research and Analysis (ICSRA). ICSRA has specialized in youth research since 1999 focusing on risk and protective factors. Planet Youth is now its own legal entity supporting communities globally and has implemented over 1 million questionnaires worldwide. Planet Youth is based in Reykjavik with employees located around the world. You can read more about our team members here: https://planetyouth.org/about/the-team/

What is Planet Youth?

Planet Youth is established on the following pillars of success:

The Planet Youth Guidance Program is based on the Icelandic Prevention Model, an evidence-based model aimed at preventing children and adolescents from the initiation of substance use.

Why was the Icelandic Prevention Model created?
Before this prevention model was applied, youth in Iceland scored near the top in alcohol, tobacco, and other drug use in 1998. Nationally almost 25% were smoking every day and over 40% had been drunk in the past month. Through a community-based approach, the country has increased connectedness among its citizens while dramatically reducing youth substance use and bullying. The chart below shows the positive changes over the last 20+ years. 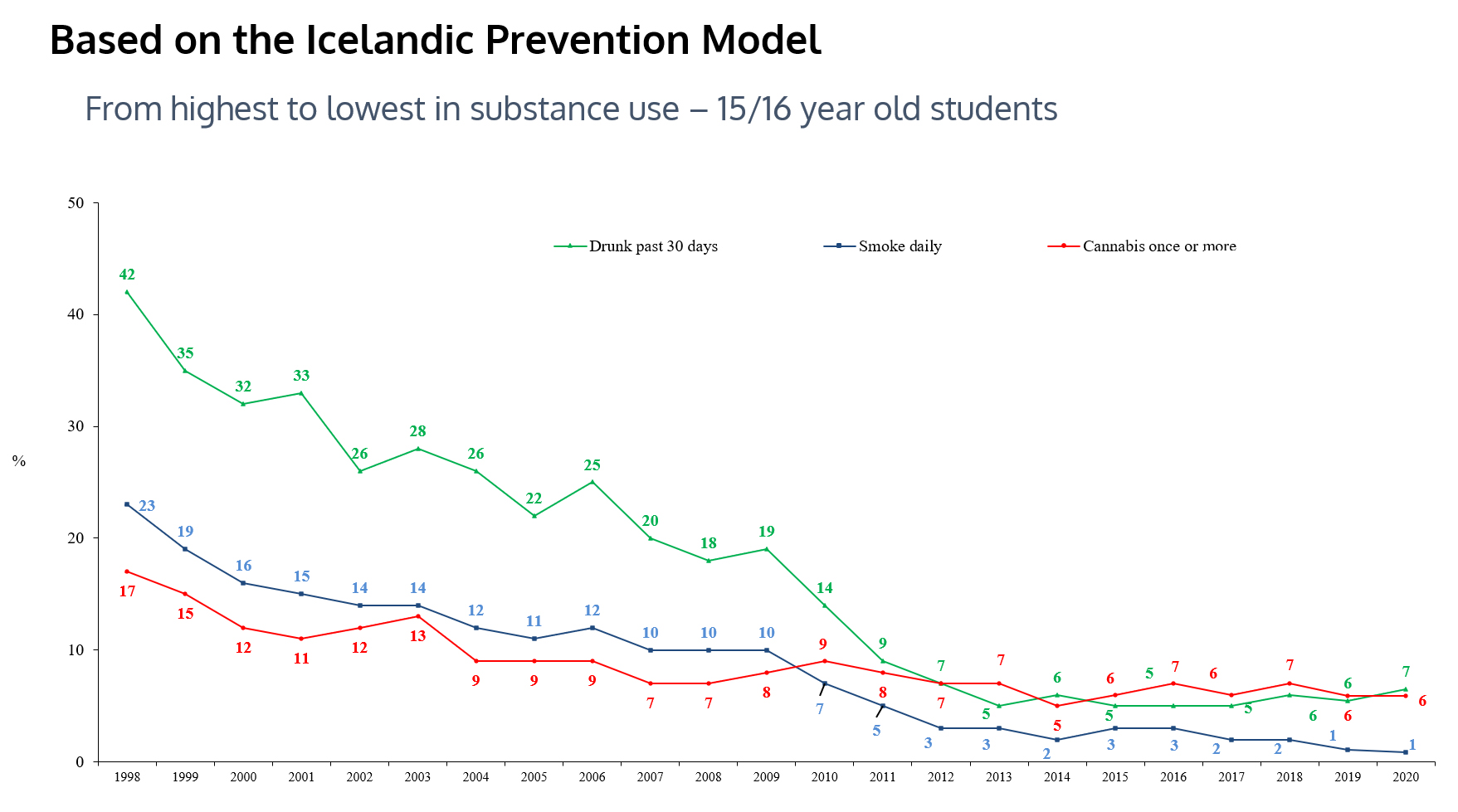 How was the Icelandic Prevention Model developed?

In developing our approach, we relied on global research findings, as well as our own local observations about those individual and societal factors that contribute to the likelihood of adolescent substance use in Iceland. Based on the literature, and informed by our own work, a community-based, bottom-up approach was designed to deter adolescent substance use. The emphasis of our approach was on getting all relevant stakeholders to the table to build a network of support, monitoring and opportunities for positive youth development at the local community level.

We aimed to demonstrate that it is possible to develop theory-driven intervention to promote and facilitate social capital on the neighborhood level, to decrease the likelihood of adolescent substance use by strengthening the supportive role of parents and schools and the network of opportunities around them. The prevention model that emerged reflexively and continuously links national-level data collection with local-level reflection and action to increase social capital. The model builds upon traditional planning models (iterative cycles of evidence, reflection, action) but with characteristics inspired by Icelandic spirit and temperament.

Where are Planet Youth communities located?

Hundreds of communities around the world have been introduced to the Planet Youth Guidance Program. To learn more about participating communities please visit: https://planetyouth.org/get-involved/communities/.

How is Planet Youth different from traditional prevention approaches?

The Planet Youth guidance program requires a shift in thinking. It requires going from an individual perspective to a collective perspective, and from short-term goal setting to long-term goal setting. Primary prevention efforts can be hard to sell because they take time. By implementing this primary prevention effort in Iceland, protective factors have increased, risk factors have decreased, and substance use in youth has been reduced.

What are some examples of the multilevel programming that has been implemented in Iceland?

Home and School, the national umbrella body for parental organizations, introduced agreements for parents to sign. The content varies depending on the age group, and individual organizations can decide what they want to include. For kids aged 13 and up, parents can pledge to follow all the recommendations, and also, for example, not to allow their kids to have unsupervised parties, not to buy alcohol for minors, and to keep an eye on the well-being of other children. These agreements educate parents but also help to strengthen their authority in the home, argues Hrefna Sigurjónsdóttir, director of Home and School. “Then it becomes harder to use the oldest excuse in the book: ‘But everybody else can!’”

State funding was increased for organized sport, music, art, dance and other clubs, to give kids alternative ways to feel part of a group, and to feel good, rather than through using alcohol and drugs, and kids from low-income families received help to take part. In Reykjavik, for instance, where more than a third of the country’s population lives, a Leisure Card gives families 350 Euro / $420 USD per child per year to pay for recreational activities.

The survey is ongoing, and new programming is being designed annually.

What were the previous actions and efforts done in Iceland to prevent youth drinking, smoking, and participating in other risky behavior?

Before the Icelandic Prevention Model, most approaches in Iceland were individual level health education, where we would teach kids about the harm of drugs at school and youth centers. “At that time, there had been all kinds of substance prevention efforts and programs,” says Inga Dóra, head researcher at ICSRA. “Mostly they were built on education.” Kids were being warned about the dangers of drink and drugs, but, as Harvey Milkman had observed in the US, these programs were not working. “We wanted to come up with a different approach.” These are common approaches, and as shown by the data, they were not helpful approaches preventing Icelandic youth from using drugs, alcohol, and participating in other risky behaviors.

Why is this multilevel approach important?

It is important for families, schools, community stakeholders, community-serving organizations, and government institutions to collaborate to create a healthy environment for children to live in. This requires teamwork, long-term vision, and long-term commitment.

Is Planet Youth easily implemented in other countries?

Yes! Many communities encompass the infrastructure to run this approach. The key to success requires collaboration, long-term commitment, ability to collect data, long-term funding, and dedication to making a difference in the community.

What is the Planet Youth survey?

The Planet Youth data tool was designed to survey youth aged 12-18 years old on risk and protective factors in key community domains (family, school, peer groups, and out-of-school time activities) in addition to perceptions of substance use. The data is very important as the key findings drive the localized plans and strategies. The frequency of the survey also allows the local teams to revisit the data and track progress annually or biennially.

How is this survey different than the Youth Risk Behavior Survey (YRBS) or European School Survey Project on Alcohol and Other Drugs (ESPAD)?

How can communities participate?

What tools and support does Planet Youth provide?

Planet Youth is here to help throughout the process. We currently provide the following:

Additionally, we are always available for questions that may come up.

Where can I learn more?

There are many materials you can read for more information.